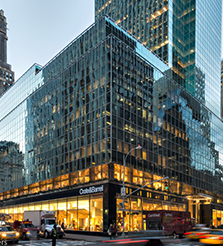 Increased availability of debt and an uptick in office rents drove demand for large Manhattan office towers in 2013. The top 10 priciest building sales of the year included nine office buildings — a threefold increase over the three office towers that cracked the top 10 list in 2012.

Those sales were driven in part by the recovery of the Manhattan office leasing market, which rebounded in 2013 after a 2012 drop-off. Last year at this time, The Real Deal was writing about that falloff, as major office tenants shied away from committing to large blocks of space. A year later, however, the market has stabilized.

The uptick is evident in the latest office market stats.

In the third quarter of 2013, the vacancy rate for Manhattan office space dropped to 11.5 percent, from 12 percent the year earlier, according to data from commercial firm Colliers International.

Five building sales topped $1 billion in 2013, while in 2012 none reached that level. In addition, there were several sales of equity stakes in office towers like the GM Building and One Worldwide Plaza, which valued those towers at several billion dollars a pop.

“Fundamentals within the office sector have improved enough that buyers are able to make compelling offers to get sellers to sell,” said Robert Knakal, chairman of investment sales brokerage Massey Knakal Realty Services. “That, and an increase [in activity] in the commercial mortgage-backed securities market, has allowed for larger transactions to occur more easily.”

Below is a rundown of Manhattan’s priciest building trades for 2013 (as recorded by Real Capital Analytics) and of the biggest office leases (as collected by The Real Deal through data provider CoStar Group, and through news and brokerage reports).

Big building sales
The aggregate value of the 10 priciest Manhattan investment sales deals for 2013 was $9.3 billion — up from $4.8 billion in 2012, an analysis by TRD found.

A close second was the $1.3 billion sale of the 1.1 million-square-foot Time Warner Center at Columbus Circle, to the Related Companies. Related, whose chairman is Stephen Ross, bought the complex from Time Warner and then leased it back to the media giant, which is slated to relocate to Related’s under-construction Hudson Yards site in a few years.

Tied for second was the $1.3 billion sale of 30 Rockefeller Plaza to communications giant Comcast. (That deal was part of Comcast’s $16.7 billion purchase of a 49 percent stake in NBC Universal from General Electric.) The only non-office building to make the 2013 list was the sale of the Helmsley Park Lane Hotel at 36 Central Park South to the Witkoff Group and its majority backer Jynwel Capital, a Hong Kong–based private equity investor (see “Witkoff: the savvy strategist”). That property sold for $660 million in late November.

By contrast, while the top deal of 2012 was the $720 million sale of an office building, 450 Lexington Avenue, the rest of that list was mostly residential, retail and hotel buys.

Brokers attributed the rise in dollar volume of Manhattan transactions in 2013 to the availability of debt and equity financing, especially since foreign sovereign wealth and private equity funds have become increasingly bullish on New York as a so-called “safe haven” for investment.

For office building sellers, rising rents and increased values in 2013 presented either a long-awaited opportunity to exit their investments with strong returns, or generated concern that the market was exhibiting the same frothiness it did in 2007 before the financial collapse, sources said. The concern about an over-heated market was compounded by the continued role of the Federal government in controlling interest rates through bond-buying, some sources said. As a result, some owners opted to sell before the rates inched up further.

“A lot of [sellers] were taking some chips off the table because they feel like we’re approaching the top of another bubble,” said J.D. Parker, first vice president at commercial brokerage Marcus & Millichap. “Certainly, anytime you have government influencing interest rates and manipulating the market, there’s always the chance that another bubble is forming.”

Are those fears unfounded?

“I think we have a ways to go,” Parker said. “I don’t think anything’s going to pop just yet, but I do think many people believe we may be nearing the top of another cycle.”

Several of Manhattan’s more high-profile investment sales deals in 2013 were not outright building sales. Instead, they were the sales of equity stakes in large office buildings. As a result, TRD is also publishing a ranking of those priciest five deals.

In the biggest deal for a minority building stake, the family of Zhang Xin (CEO of office landlord Soho China), and a company controlled by Brazilian banking magnate Moise Safra bought a 40 percent piece of the GM Building for $1.4 billion from a group of Middle Eastern sovereign wealth funds. The remaining 60 percent is owned by Boston Properties. The transaction valued the entire building at a stunning $3.4 billion. Boston Properties and the Middle Eastern group bought the building for $2.8 billion from developer Harry Macklowe in 2008, the highest amount ever paid for a U.S. office building.

That building stake sale was followed by deals at One Worldwide Plaza, 1345 Sixth Avenue and 605 Third Avenue. Real estate investment trust American Realty Capital bought a 48.9 percent stake in One Worldwide Plaza from a consortium of investors led by George Comfort & Sons, while the Rockpoint Group bought a 49.5 percent stake in the other two towers from the estate of billionaire Daniel Ludwig for a combined $1.1 billion.

Knakal attributed the rise in building stake sales to a fundamental shift in the way the capital stack was structured in the wake of the recession.

“In 2006 and 2007, an investor could put just 5 or 10 percent equity in a deal and completely finance the rest of the purchase,” he explained. “In the last few years, we’ve seen that level of financing is not available, so the operator that’s going to run the building needs to go out and get equity investors.”

Often, the objectives of the equity investors and the operating partners clash. As a result, an increased number of equity investors have wanted out, prompting partial stake sales, he said.

Others said the rise in stake sales was the result of an uptick in the number of foreign investors active in New York. Foreign companies, rushing to get capital into New York, can avoid taxes by acquiring a non-controlling stake of a property. As outsiders, they may also want to partner with an experienced local player in order to maximize their return on investment.

“When you’re buying a non-controlling interest in the building, all you’re really doing is placing your capital to work,” said Michael Cohen, president of the tri-state region at Colliers. “It’s pure capital flight and has nothing to do with investing to reposition. It’s a step above buying stock in a real estate investment trust. It’s a pure capital play.”

Manhattan’s office leasing experienced a revival heading into the spring, but leveled out by the third quarter.

Cushman & Wakefield regional research director Donald Noland told TRD that he expected new office leases, not including renewals, to exceed 25 million square feet for 2013 once all the numbers are in. That’s a nearly 8 percent jump over the 23.2 million square feet seen by the commercial brokerage in 2012.

Of the 10 largest Manhattan office leases in 2013, there were three new leases and six renewals and one leaseback. In 2012, however, there was just one new lease.

“The big thing to note is that a lot of this is new leasing activity,” Noland said. “What that means is that renewals have dropped off a little bit over the past year. [That new activity is] a sign that tenants are looking to make a bigger investment in their location.”

Still, some said tenants remain antsy that the market might not be able to sustain the recent wave of growth.

“So many tenants are concerned that we are on a peak,” said Newmark Grubb Knight Frank principal Mark Weiss.

In the biggest lease of the year, which was valued at more than $1 billion, financial services giant Citigroup renewed its 2.7 million square feet of space at 388 and 390 Greenwich Street. The complex is owned by SL Green Realty, which is headed by Marc Holliday.

Sony Corporation of America had the second biggest office lease of 2013 with a 798,420-square-foot leaseback deal from the Chetrit Group at 550 Madison Avenue. Sony sold the building to a Chetrit-led consortium of investors for $1.1 billion last January, but inked a deal to lease back the premises for three years.

For the Downtown Manhattan leasing market, the year was particularly favorable, brokers said.

In addition to 523,000 square feet of positive net absorption in the third quarter, the area saw leasing volume jump by 2.8 percent in October, the most recent month for which data was available, compared with a year ago. Meanwhile, the average asking rent during that time ticked up by 14.8 percent, to $45.66 per square foot, according to information provided by Cushman & Wakefield.

The activity has been driven in large part by non-financial tenants jumping ship from Midtown and Midtown South.

“Registering more than a half of a million square feet of positive absorption during the third quarter is remarkable,” said Tara Stacom, a Cushman & Wakefield executive vice president. “For perhaps the first time in its history, Downtown is increasingly being seen as a tenant’s most desired option.”