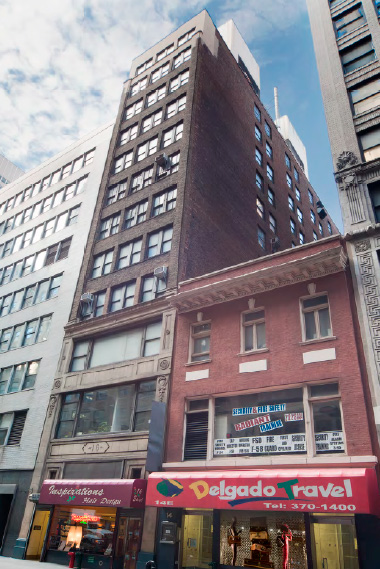 Hotelier Sam Chang is planning a new 22-story, 162-key hotel in Midtown, according to permit applications filed Tuesday with the city’s Department of Buildings.

Plans indicate the Great Neck-based developer wants to build a new hotel at 9 East 38th Street, between Fifth and Madison avenues, that would span more than 66,000 square feet. The existing structure is a 12-story office building.

While the filing lists Chang as the property’s owner, the 12-story, 84,000-square-foot office building currently occupying the site is owned by a partnership between Stamford, Conn.-based Juster Properties and Midtown-based ClearRock Properties, city records show.

The two firms acquired the building and an adjacent property from Yeshiva University for a combined $29 million in 2013.

Juster and ClearRock have since hired a Cushman & Wakefield investment sales team led by Bob Knakal to market the adjacent properties, which span 101,000 square feet of office and retail space and feature 22,000 square feet of developable air rights, according to ClearRock’s website.

But property records indicate any sale has yet to close, and demolition permits have yet to be filed for the existing building on the site.

Chang’s hotel project, designed by Soho-based architect Gene Kaufman, would feature nine rooms on each of its second through ninth floors, eight rooms on each of the 10th through 18th floors and six rooms each on floors 19 through 21, according to the filing.

A lounge area would occupy the hotel’s top floor, while the cellar space would house a dining area for guests as well as an exercise room.

Neither Chang nor Kaufman returned requests for comment. Juster and ClearRock declined to comment on the property.